Sánchez, the 'Cachorro' of the GuaranÃ­ game 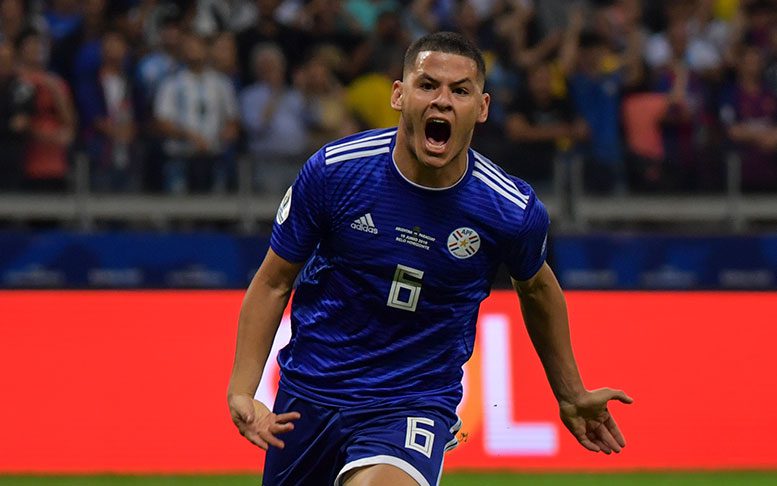 Two years ago, Richard Sanchez, midfielder of the Paraguayan national team, was playing in the youth (base football) of Club Olimpia, dreaming of making his first division debut with his team. After intense days of work, today, at the age of 23, he defends the colors of his country and on Wednesday night he scored a goal to crown his first starting game in the CONMEBOL Copa América Brasil 2019.

«A few years ago at the Franjeada Foundation your dream was to play in the first edition. Today you defend Paraguay against the best in the world. Congratulations Richi, effort and dedication always bear fruit from the hand of God», said Olympia president Marco Trovato, who followed the player’s growth process.

Richard Sanchez was called by the TD of the Paraguayan national team, Eduardo Berizzo, to join the preliminary list of the Copa America 2019, however, was not confirmed on the official list.

He was called for emergency, an injury to his teammate Richard Ortiz, allowed the ‘Cachorro’ Sanchez to travel for the first time to an official tournament with the Albirroja. «It’s a dream come true, I’m sorry it’s this way – through an injury – but I’ll take advantage of every minute I play», said the midfielder.
-Maximum benefit-

Paraguay missed two points against Qatar. They had a two-goal lead and suddenly were tied by the Asians in the final minutes of the game. Berizzo still could not find the formula in the midfield, until the inclusion of Sanchez, who paired with Rodrigo Rojas, both players of Olympia.

«Richard’s entry was substantial. It was the recipe we needed against Qatar and we got it late. Today (against Argentina) not only did he play a great game, but he allowed his team-mates to play better, arranging the midfield, and giving defensive solidity to that area of the field», said Berizzo, who without hesitation placed Sanchez among the eleven starters against Argentina.

-It’s not the first time.

Sanchez became known for the power of his strike. He remembers a goal in the classic against Cerro Porteño, which brought victory to his team Olimpia. Or, perhaps, an air shot outside the area against Libertad, which meant another triumph. All for the First Division of Paraguayan football.

In his professional career he has scored 9 goals in 80 games. (75 for Olimpia and 5 for La Albirroja). Last night he played his first match against the Paraguayan national team and scored his first official goal.

A run by Almirón on the left flank, in which he left behind the Argentinians Roberto Pereyra and Milton Casco, ceded to the center to get the ‘Cachorro’, free to choose where to beat the Argentine goalkeeper Franco Armani, put ahead on the scoreboard the Albirroja against the Albiceleste, which tied through a penalty by Lio Messi.

A game of the Paraguayan youth, which is set to start against Colombia (classified), where Paraguay will seek their ticket to the quarterfinals on the final date of Group B.

Argentina, for their part, will face Qatar, with the mission of adding the three points to advance.