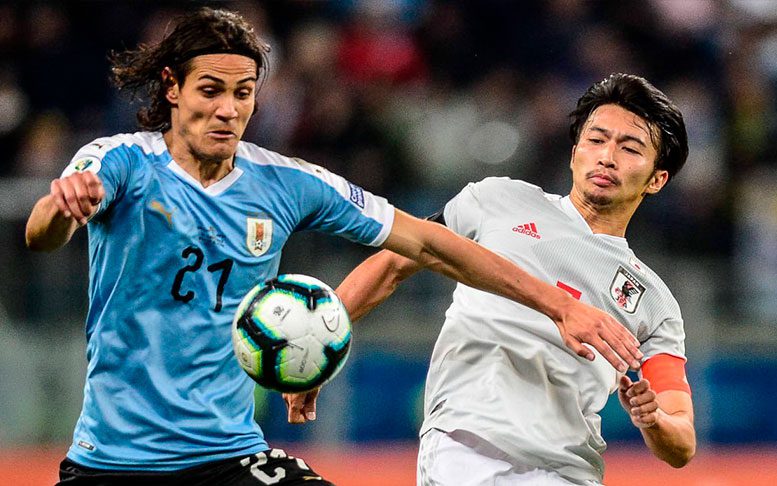 Uruguay stopped against Japan 2-2 in a game played in Porto Alegre, by group C of the CONMEBOL Copa America on Thursday night. The Japanese team took the lead on two occasions, the Charrúas managed to recover and kept the tie.

Koji Miyoshi scored both goals for the Japanese team, at 25 and 59 minutes, while Luis Suarez (32) and Jose Maria Gimenez (66) scored the goals for the Charrúa team.

Japan played without complexes and with fast moves, they show the lack of coordination in the setbacks of a Uruguay that had started the Cup by beating Ecuador. In front, the star striker of the Celeste formed by Luis Suarez and Edinson Cavani missed more than enough.

Uruguay leads the series with four points, followed by Chile who, with three points, face on Friday an Ecuador who lost 4-0 in their debut against La Celeste. Japan, with one unit, dream of making history and advancing to the next phase of the Cup.

– Statistics –
Japan scored their second point in five CONMEBOL Copa América matches (2E 3D); they had tied 1-1 against Bolivia in 1999.

Four corner goals have been scored in the CONMEBOL Copa América 2019 (11 PJ), the same number as in the entire 2016 edition (32 PJ); Uruguay scored three of the four goals in this way in this tournament, including José Marí Giménez’s against Japan.

Three of the five shots to the post in the Copa América 2019 were from Uruguay; Luis Suarez and Edinson Cavani had one against Japan, while Cavani also had one against Ecuador.

Edinson Cavani also equals Diego Forlán as the third player with the most games with Uruguay in history (112).

Fernando Muslera reached 15 matches in Copa América and overcame Roque Gastón Máspoli as Uruguay’s goalkeeper with the most games in the history of this tournament.

Japan’s Koji Miyoshi became Japan’s first player to double against Uruguay in the Copa América since Argentina’s Luciano Figueroa in 2004.

With his goal for the 2-2 tie against Japan, José Marí Giménez reached eight goals with Uruguay; all were headers (4 in free kick plays, 4 from the corner).