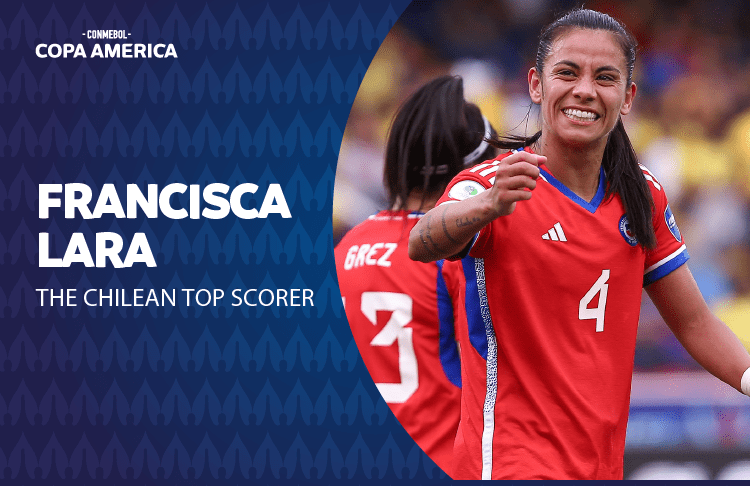 If we talk about Chilean history at the most important tournament in the continent, the first player that comes to mind is Francisca Lara, the midfielder that plays in Villarreal, in Spain’s main league (”Primera División”).

Lara’s career path is extraordinary. With 27 goals in 90 games, she is the top scorer of the Women’s National Team. Her history in CONMEBOL Women’s America Cup is for textbooks in the Andean country. At the 2010 and 2014 editions, both held in Ecuador, she was the team’s top scorer with three goals in each tournament. In Chile 2018, she scored two goals: one to Peru and the other to Argentina, as part of the historical triumph by 4-0 that made possible for the local team to qualify for FIFA Women’s World Cup.

She began playing in Ferroviarios, then she went to Coquimbo Unido and later, to Cobreloa. In 2012, she arrived to Colo-Colo, where she lifted 12 national trophies in 5 seasons and the 2012’s CONMEBOL Libertadores. In 2017 she resettled in Europe and played for Sporting Club de Huelva. In 2018, she played for Sevilla and in 2020, she was part of France’s Le Havre AC team. Finally, she arrived to Villareal in 2021, where she is currently playing.

In the 2018 and 2022 editions of CONMEBOL Women’s America Cup, the Chilean National Team was granted with the Fair Play award, which exalts Francisca Lara’s figure in the most important tournament of the continent.