Brazil 3-0 Argentina: The heart-stopping final of the 2007 CONMEBOL Copa América 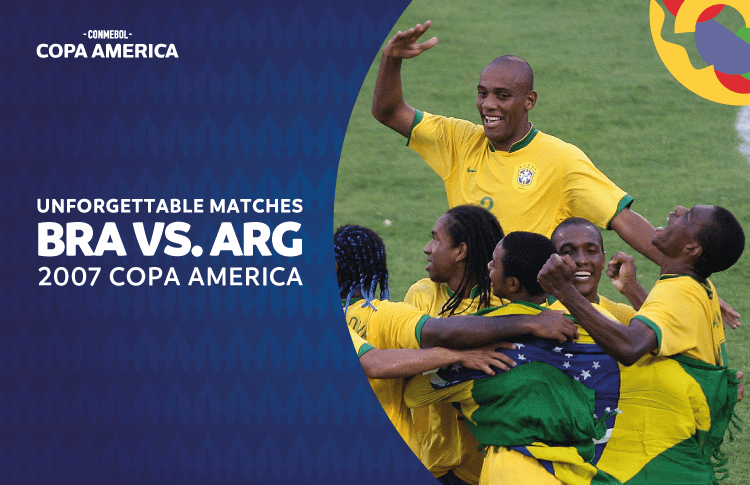 On July 15, 2022, it will be the 15th anniversary of one of the most unforgettable matches in the history of the CONMEBOL Copa America. Brazil national team, under the wing of Dunga, faced Argentina national team, lead by Alfio Basile, in a battle that ended up in one of the biggest thrashings that had ever happened in a final in this continental tournament.

On one side of the field, Brazil, led by Gilberto Silva, Júlio Baptista and Robinho, had not done its best in the group stage and had finished in second place, right after the unexpected Mexico national team. On the other side, there stood Argentina, which also had great stars, such as Roberto Ayala, Juan Román Riquelme and a promising Lionel Messi.

It can be said that the match had started badly for the albiceleste team since they came out of the dressing room. Mineiro passed the ball to Elano, who hoofed it to Baptista. The winger and Ayala were one-on-one on the edge of the area and, without any hesitation, the former nailed an incredible screamer to the furthest goalpost from the ball. AMAZING GOAL! This event began to lower the morale of the Argentina national team during the match.

8 minutes into the match and Argentina was the one playing harder. It seemed that the albiceleste could even the score. Heinze played the ball to Messi, who did a faint and kicked a cross to Veron. The latter brought down the ball and passed it to Riquelme, who kicked the ball and it hit Doni’s left post.

Almost at the end of the first half, which the albiceleste team was wishing to forget, a series of passes of the “Scratch” team left the defense bewildered. Dani Alves was the one who took the ball through the side of the field and kicked a cross. Unfortunately, Ayala deflected the ball to his own goal. The half time began with a score of 2-0.

In extra time, everything would continue the same but Basile’s team kept on pressuring the opposite one. This would not do much good, since, on the 69th minute, a very good defense done by the yellow team, together with an model combination between Robinho, Vágner Love and Alves led to the scoring of the final goal in the match by the winning team and left his main historical rival chanceless.

As a bonus, after winning this game, Dunga’s team won the 2007 edition of the CONMEBOL Copa América to the joy of all the Brazilian people.