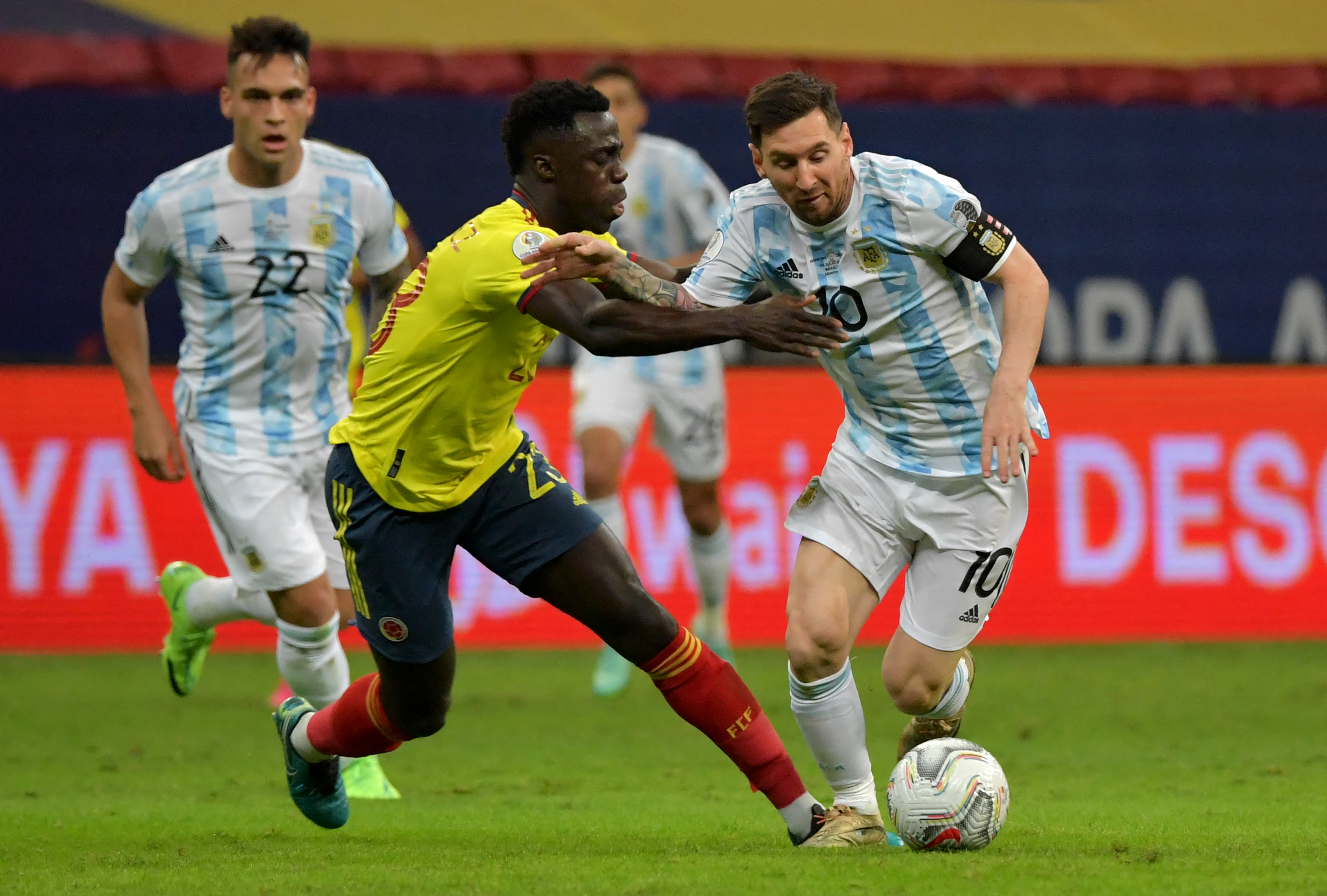 In an open and exciting game, Argentina qualified for the final of the  CONMEBOL Copa América 2021 with a 3-2 win on penalties following a 1-1 draw at the end of normal time.

Lautaro Martínez and Luis Díaz scored the goals during the 90 minutes while goalkeeper Emiliano Martínez was the star of the shootout with 3 saves to  line up an Argentina vs Brazil final next saturday.

Lionel Scaloni’s side began the game on front foot and created their first chance with just 3 minutes on the clock. Lionel Messi set up Lautaro Martinez with a cross but the Inter man sent his effort narrowly wide.

A few minutes later, Messi was once again the creator as he turned Yerry Mina in the box and pulled a pass back to Martínez. This time Lautaro made no mistake to give Argentina an early lead, rewarding their proactive play.

Colombia, who had made a nervy start, were awoken by the goal and started to have an impact on the game. Juan Cuadrado arrived at the edge of the box to fire a low shot which Emiliano Martínez saved well.

From then on, Argentina sat back and allowed their opponents to control possession. This gave Reinaldo Rueda’s side confidence and they began to grow into the game.

Just after the half hour mark Colombia came very close to equalizing on two occasions.

First Wilmar Barrios hit a powerful shot from range which deflected off the leg of Giovani Lo Celso and hit the post with Martinez helpless. Mina won the header from the resulting corner but his attempt also the wordwork, pinging off the top of the bar.

Rueda made three changes for the second half with Edwin Cardona and Yimmi Chará brought on to add invention to the attack and Frank Fabra to bring fresh attacking width from fullback. Miguel Borja was also introduced up front around the hour mark.

Colombia were now consistently on top with Argentina creating little. With that came the equalizer.

Edwin Cardona sent an excellent through ball for the pacey, impressive Luis Diaz to cut inside Pezzella and finish from a tight angle.

Following the equalizer Argentina began to again search for a goal and they pushed Colombia with los cafeteros still posing a threat on the break.

La Albiceleste came incredibly close to a winner. Second half substitute Ángel Di María rounded Ospina squared to Lautaro Martinez in the box but the retreating Barrios  made an incredible, sliding goal line clearance to prevent a certain goal.

Argentina came closest to a winner in the final minutes but Colombia were able to keep them at bay to set up a dramatic penalty shootout.

In the end Emiliano Martínez was the hero on the night for Argentina with the Villa goalkeeper saving 3 of the 5 penalties he faced.

Argentina will now face Brazil in the CONMEBOL Copa América 2021 final on Saturday.

ï‚· Games between Colombia and Argentina have ended on penalties on three occasions in the CONMEBOL Copa América. Argentina have always won including in the 1993 semi-final when Argentina would go on to win their most recent title.

ï‚· With Lionel Scaloni as manager, Argentina has met Colombia 4 times but are yet to win over 90 minutes (3 draws, 1 loss).

ï‚· Argentina won only 2 of their last 10 games against Colombia on nuetral soil (5 draws, 3 losses).

ï‚· Tonight’s game had the most fouls of any in the current edition of CONMEBOL Copa América: 47 total, 20 by Argentina and 27 by Colombia. The previous record came in the opening game of the group stage between Colombia and Ecuador (35).

ï‚· This was also the game with the most yellow cards at the CONMEBOL Copa América: 10 in total, 4 for Argentina and 6 for Colombia.

ï‚· Excluding the game against Bolivia, in the current CONMEBOL Copa América Argentina has averaged 58% possession when the game is level and 40% when they are winning.

ï‚· Juan Cuadrado played his 100th game for Colombia: 9 at the World Cup, 20 in the Copa America, 32 in World Cup Qualifying and 39 in friendlies. He has scored 8 oals. His debut came on 3 September 2010 in a friendly against Venezuela.

ï‚· Luis Díaz scored the equalizer to become Colombia’s top scorer in the tournament with 2. He also finished as the Colombian player with the fourth most shots on goal with 6 behind  Duván Zapata (14), Miguel Borja (10) and Yerry Mina (8).